Bay of Flags & other poems

A distinguished art gallery director, and curator of major exhibitions by some of the art world’s most celebrated names, Enrique Juncosa is also a much-admired poet in his native Spanish. Bay of Flags & other poems draws on the two most recent of his six Spanish publications and introduces English language readers to what translator Michael Smith in his Introduction calls “a boundless curiosity about other people and places, an astonishingly broad interest in most of the major art forms, and an enthusiasm to experiment that matches the novelty of what he has encountered on his travels”. Formally energetic, Juncosa’s poetry reveals what the poet himself terms “a certain obsession with lists and proper names, of people and places” – as well as a focus on the external world that will hold the reader’s attention throughout even where it refuses linear narrative or tidy conclusion. “Ultimately,” as Michael Smith puts it, “the poems are celebratory, of the world in all its incomprehensible strangeness and its beauty.” Enrique Juncosa was born in Palma de Mallorca in 1961. He has published six collections of poetry in his native Spanish, from the most recent two of which—Las espirales naranja (2002) and Bahía de las banderas (2007)—the poems in the present volume are taken. Since 2003 Juncosa is also the director of the Irish Museum of Modern Art where he edits the journal Boulevard Magenta. He has been deputy director of the Museo Nacional Centro de Arte Reina Sofía in Madrid and of the Instituto Valenciano de Arte Moderno. Enrique Juncosa has curated numerous shows of many major artists including Dorothy Cross, Howard Hodgkin, Miroslaw Balka, James Coleman and Terry Winters (whose artwork features on the cover of Bay of Flags and other poems). 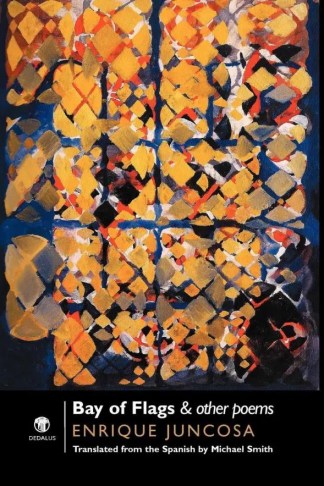 You're viewing: Bay of Flags & other poems €12.50
Add to basket
We use cookies on our website to give you the most relevant experience by remembering your preferences and repeat visits. By clicking “Accept All”, you consent to the use of all of the cookies. However, you may instead visit "Cookie Settings" to provide a controlled consent.
Cookie SettingsAccept All
Manage consent