Coloured Handprints introduces the work of 20 contemporary German-speaking poets, from Germany, Austria and Switzerland, to an English-language readership

Coloured Handprints introduces the work of 20 contemporary German-speaking poets, from Germany, Austria and Switzerland, to an English-language readership. Edited by Anatoly Kudryavitsky, and translated from the German by Kudryavitsky and Yulia Kudryavitskaya the volume explores the reunified Germany, sometimes from the vantage point of “the train halted in the middle of the track” (‘hamburg – berlin’, by Jan Wagner), as it also reveals a modern Europe of “administrative chaos draped in / Brussels lace” (‘Ach, Europa’, by Nora Bossong). More than anything, however, it asserts the power of poetry to balance dissent, fierce emotion and calm observation in forms that draw on the past but speak to the present and the future.

She belongs in these narrow, unquiet meadows, a king’s daughter
with an irrational fear of bulls. Who can blame her
after all that has happened? She suffered from wars as people
suffer from colds. Her apron is full of windfall countries from the plain;
Babel built upon every blade of grass, administrative chaos draped in
Brussels lace. Lunatics and dignitaries she puts on display,
gabbers and evil minds. The marsh marigold would be
the safe choice, but we like something about her,
Europa, a frightened dwarf at the end of the world. We encourage her
and assume that one day she’ll come good.

The Camera in the Service of Ethnology

Anatoly Kudryavitsky was born in 1954 in Moscow of a Polish father and half-Irish mother. He lives in South Co. Dublin, where edits Shamrock Haiku Journal. A bilingual author writing in English and Russian, he has published three novels, the English translation of his last one appearing as disUnity (Glagoslav, 2013), and eight collections of his Russian poems, the latest title being New and Selected Poems (DOOS Books, Moscow, 2015). He has also published three books of his English poems: Shadow of Time (Goldsmith, 2005), Morning at Mount Ring (Doghouse, 2007) and Capering Moons (Doghouse, 2011), the last two being collections of his haiku. He also edited the anthology of contemporary Russian poetry in English translation entitled A Night in the Nabokov Hotel (Dedalus, 2006), the anthology of contemporary German-language poetry in English translation titled Coloured Handprints (Dedalus, 2015) and the anthology of haiku poetry from Ireland titled Bamboo Dreams (Doghouse, 2012). In 2003, he won the Maria Edgeworth poetry prize, and in 2010 was the recipient of the David Burliuk Award for life-long commitment to experimental poetry. Among his haiku awards are the Suruga Baika Prize of Excellence (Japan, 2008) and the Vladimir Devidé Award (Japan, 2012 and 2014). "Writing seems to be intuitive; it has taught me to connect with my inner self in this way. To me, poetry is about seeing the world in a different light and sharing my vision with my readers." 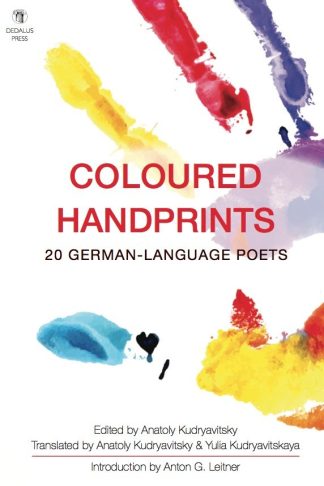 You're viewing: Coloured Handprints: 20 German-Language Poets €13.50
Add to basket
We use cookies on our website to give you the most relevant experience by remembering your preferences and repeat visits. By clicking “Accept All”, you consent to the use of all of the cookies. However, you may instead visit "Cookie Settings" to provide a controlled consent.
Cookie SettingsAccept All
Manage consent