All Poetry, Anthologies, Poetry from Ireland

Dedalus New Writers  aims to introduce a small number of emerging writers, offering a more extensive selection of their work than might easily be accommodated in a literary journal or magazine. In doing so, we hope both to encourage new talent and to whet the appetites of the many admirers of new writing from Ireland, at home and abroad. The writers included in this first volume are poets Marie Coveney, Clare McCotter and John Saunders.

CLARE McCOTTER has worked as a psychiatric nurse, a lecturer and an English teacher. She was awarded a Ph.D from the University of Ulster in 2005, and has published numerous peer-reviewed articles on Beatrice Grimshaw’s travel writing and fiction. Her haiku, tanka and haibun have appeared in many journals and magazines. In 2008 she was runner-up in the Leaf Book International Poetry Competition, and winner of the IHS Dóchas Ireland Haiku Award in 2010 and 2011. She judged the British Haiku Awards 2010 and 2011. Black Horse Running: a collection of haiku, tanka and haibun (Alba Publishing, 2012) is her first collection. Home is Kilrea, Co. Derry.

JOHN SAUNDERS first collection After the Accident was published in 2010 by Lapwing Press, Belfast. His poems have appeared widely in journals and magazines. He is the Director of Shine, a national voluntary mental health organisation. He lives in Co. Offaly.

“It’s heartening to see the return of the “Introductory Volume” to bring readers to “new” poets (experienced though they are). Coveney, McCotter & Saunders are good choices to kick off what looks to be a series of volumes. These writers bring a sincere humanity to poetry, with a strong examining eye for the ills and oddities of the present day. Measuring is a recommended purchase, for its scope and variety, and for the saintly knowledge that you will have supported the growth of real talent by giving it audience.” — Jennifer Matthews, Southword 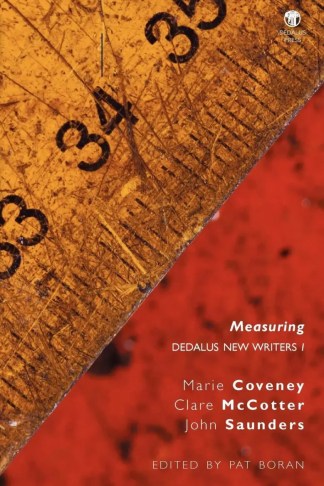 You're viewing: Measuring: Dedalus New Writers 1 €11.00
Add to basket
We use cookies on our website to give you the most relevant experience by remembering your preferences and repeat visits. By clicking “Accept All”, you consent to the use of all of the cookies. However, you may instead visit "Cookie Settings" to provide a controlled consent.
Cookie SettingsAccept All
Manage consent