An English-Japanese bilingual edition. Translated from the Japanese by Mitsuko Ohno and Frank Sewell with an introduction by Nobuaki Tochigi

Mutsuo Takahashi was born in Japan in 1937, and educated at Fukuoka University of Education. An eminent playwright and poet, he has published many collections of haiku and tanka and more than twenty collections of free verse in his native Japanese. On Two Shores draws to some extent on that earlier work but also features more recent poems, including more than a dozen written during and after a tour of Ireland in the summer of 1999, a trip which, according to Nobuaki Tochigi in his Introduction, led to Mutsuo Takahashi’s “regaining his faith in poetry”. On Two Shores is translated into English by Mitsuko Ohno and Frank Sewell. The book is presented in two ‘halves’, with the English translations mirroring the Japanese originals.

The result is a fascinating bridging of cultures, an illuminating view of Ireland from ‘the outside’ and a journey to the well of inspiration for this major poet.

This is a delightful volume, especially for anyone who knows the Irish poets Takahashi finds himself among. But it has much to offer any reader. The Japanese and English texts run in opposite directions, and there are some sketches in the middle, where they meet. It is perhaps the first book of this kind to appear in Ireland, and the translators have done a fine job.”
— David Burleigh, The Japan Times Online

Mutsuo Takahashi was born in Japan in 1937, and educated at Fukuoka University of Education. A playwright and poet, he has published many collections of poems in Japanese and his On Two Shores: New and Selected Poems was published in April 2006 by the Dedalus Press, featuring translations by Mitsuko Ohno and Frank Sewell, and with an introduction by Nobuaki Tochigi, according to whom Takahashi is "a traditionalist, who is able to feel at home with such long-established poetic forms as haiku and tanka, as well as theatrical forms such as Noh and Kyogen. Yet, this is but one side of his resourcefulness; he is first and foremost a free verse poet who lives a cosmopolitan life." 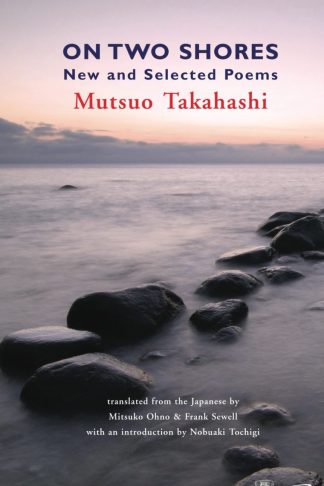 You're viewing: On Two Shores: New and Selected Poems €12.00 – €20.00
Select options
We use cookies on our website to give you the most relevant experience by remembering your preferences and repeat visits. By clicking “Accept All”, you consent to the use of all of the cookies. However, you may instead visit "Cookie Settings" to provide a controlled consent.
Cookie SettingsAccept All
Manage consent