Sonic White Poise is the third full-length collection of poems from Cork-born and -based Irish poet Patrick Cotter.

Patrick Cotter is a force of nature. There is simply no other way to describe the comedy, the wisdom, the eloquence and light touch of his work. One thing for sure: this poet is not boring. This poet won’t leave you guessing at what exactly he meant to say. This poet is willing to be vulnerable, he is willing to speak of this precise moment in time, yet it is his passion that survives this moment, it is his syntax that woos us in. Yes, you will get here that uncompromising, direct, playful tone – but it will also be the tone that will speak of our ruined economies, our regrets, our lost lives, and also our delight, our surprise.
There is life in these pages – life that is both real and miraculous, life that teaches us wisdom. Wisdom of what? you might ask. That “before the revolution it is time to play guitar in a park.” Indeed. I love this book.
— Ilya Kaminsky, author of Deaf Republic and Dancing In Odessa, on Patrick Cotter’s Sonic White Poise

“Be your own bedroom general: there is no braver man than a soldier in the form of a figurine.”
—Airfix Magazine, 1961

Behold this box of jumbled varicoloured lives
I once held daily office with; each a repository
for an imagined soul I would heap into piles
of the damned and the saved. I watched them

suffer many deaths, many resurrections.
Not all were assigned the daydreamt saga
of a hero, or made the renowned shaper
of a bedroom history; but this one of the Afrika Korps,

field glasses permanently to his face, liberated the second
floor landing, opposite the bathroom, several times
from grey-hued Soviet occupation. And this red
Roman legionnaire with flaked paint, cracked base,

truncated gladius, become emperor, promoted
through the ranks after a humble beginning
at a convent school bazaar, peddled by the nuns
like common pillaged booty, bought for a bright

new decimal penny. And this British officer, Webley
at the ready, running for his life, is really West Waterford gentry.
They suffered actual attritiona too: vanished by the platoon
into the acquisitive pockets of the boys from the police barracks

or swept by the battalion by my mother into the ashbin’s abyss,
a kinetic cleansing when their billeting on her linoleum floors
had stretched too long beyond teatime. After forty years I recall
their stories still, more clearly than many of my own.

I can remember each of their frozen poses and playwear scars,
their stoicism as something truly holy, not plastic, not leaden. Patrick Cotter is an Irish poet, born in Cork City where he still lives and works as a literary festival organiser and editor. His poems have been published in journals such as the Financial Times, The London Review of Books, Poetry and Poetry Review. He is a recipient of the Keats-Shelley Prize for Poetry. His poems have been translated into over a dozen languages and he has given readings of his work across the Northern Hemisphere. Sonic White Poise is his third full-length collection. See also www.patrickcotter.ie. 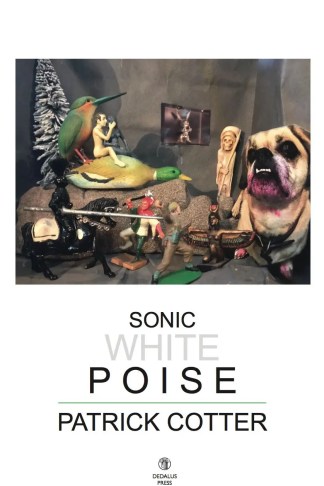 You're viewing: Sonic White Poise €12.50 – €20.00
Select options
We use cookies on our website to give you the most relevant experience by remembering your preferences and repeat visits. By clicking “Accept All”, you consent to the use of all of the cookies. However, you may instead visit "Cookie Settings" to provide a controlled consent.
Cookie SettingsAccept All
Manage consent