The End of the World

The End of the World is the seventh collection of poems by “a true poet whose work will stand as a crowning privilege in our generation” — Thomas McCarthy, Trumpet

Patrick Deeley’s seventh collection of poems displays his deep-rooted concern for and engagement with the world around him – expressed, as ever, in muscular, musical, impassioned and persuasive verse.

In The End of the World, however, the tone is more troubled, more urgent. Here, multiple visions of “the uselessness / even of beauty in face of greed or misfortune” add up to a quiet but powerful appeal to something in our too-often distracted better selves.

Deeley reflects on today’s uncertain times, the potential for calamity where “barbarity shadows the loveliness always”. His evocations of wet meadow, seashore, city street, desert and moorland move with wonder through the living moment, sing the desire to make life last.

“Deeley’s mature style is consummate. The consonantal texturing of his lines crackle like active thoughts to recreate the experience of being actively in his world, or as he writes in the poem ‘Scribble Lark’: ‘to look deeper in…’ This is densely patterned language reaching to be an equivalent for lived experience but it is never strained or overdone. Intimate but not confessional with a sometimes creeped-out sense of deep time and dereliction (human, planetary), the general tone is constantly leavened and lightened by a warmth and a wry humour, by as it were in his own words: ‘my skew-whiff song’.”
— Causeway / Cabhsair

“Though a number of Irish poets have written about the great changes in Ireland during the last ten to fifteen years, none have done it as beautifully, as potently as Deeley.”
— Contrary (USA)

The End of the World

except, as the man says, the end of the world
is happening. And the sight of a green snake flicking
its tongue at a chainsaw that keeps cutting;
and the sight of a rainbow flourished above the city
after we look up from the crumpled shape
of the girl, both haunt us, being more than props

for pathos, more than backdrops to the uselessness
even of beauty in face of greed or misfortune.
The end of the world is happening, and grief that stands
sudden tears in our staring eyes might wish them
closed as soon, with no desire to open again –
but this, too, is the world, and somehow a beginning. 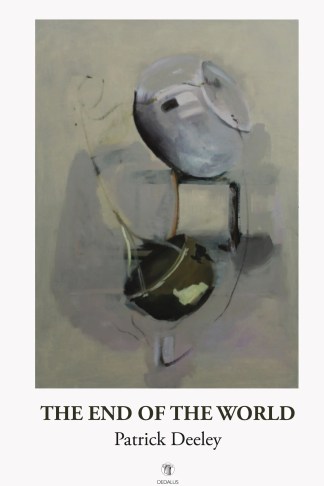 You're viewing: The End of the World €12.50 – €20.00
Select options
We use cookies on our website to give you the most relevant experience by remembering your preferences and repeat visits. By clicking “Accept All”, you consent to the use of all of the cookies. However, you may instead visit "Cookie Settings" to provide a controlled consent.
Cookie SettingsAccept All
Manage consent