Translated by Pádraig J. Daly, these poems by the 13th century Umbrian friar Jacopone Da Todi celebrate madness in the devotion to Christ.

Translated by Pádraig J. Daly, these poems by the 13th century Umbrian friar Jacopone Da Todi celebrate madness in the devotion to Christ.

Jacopone Da Todi (Jacopo Benedetti) was born, as his familiar name implies, in the Umbrian hilltop town of Todi in the year 1230. After the death of his wife in an horrendous accident, he discovered that, beneath her clothing, she wore a penitential hairshirt, and this spurred him to become a public penitent and, after a decade of extremely eccentric behaviour, to enter the recently formed Order of Friars Minor of St. Francis of Assisi. In 1298 he was excommunicated and imprisoned for signing a manifesto against Pope Boniface VIII and, following his release, retired to a hermitage. Considered a pioneer in Italian theatre, Jacopone is probably nowadays best known as the author of religious poems, typified by their “flamboyant and, sometimes, heartbreaking drama”. “Like George Herbert in English, Jacopone was filled with the convinction that God extravagantly loves sinful humans. Jacopone is, however, more word-prodigal than Herbert, and his extrovert, singing voice is unmistakably that of early Franciscan Umbria… Few people nowadays would subscribe completely to Jacopone’s theological outlook. He did not have the insights of modern theology or scripture studies. ‘The Lauds’ celebrate madness for the sake of Christ and sometimes Jacopone appears to barely cling to the right side of sanity, not to talk of orthodoxy. But how can anyone express religious experience without destroying it?” Pádraig J. Daly was born in Dungarvan, Co. Waterford in 1943 and works as an Augustinian priest in Dublin. He has published several collections of poetry, among them The Last Dreamers: New & Selected Poems (1999), The Other Sea (2003), Afterlife (2010) and God in Winter (2015). His translations include a selection from the Italian of Edoardo Sanguineti, Libretto (1999), which feature in The FSG Book of Twentieth-Century Italian Poetry, and Paolo Ruffilli's Joy and Mourning (reissued 2007), among others. Daly comments: "I write poetry as a way of understanding, questioning and celebrating God and the world." “Daly offers the most sustained attempt at serious religious poetry in Ireland and the distinct pleasure of the exquisite use of language.” — John F. Deane 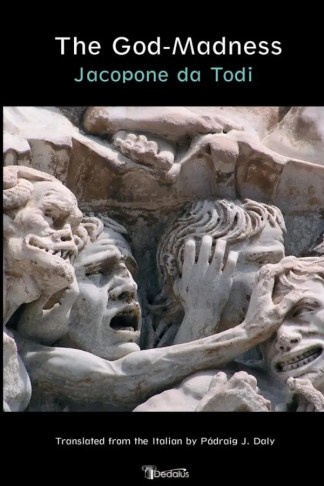