WRITING HOME: THE ‘NEW IRISH’ POETS is a major new anthology of writing from Ireland that acknowledges and celebrates the contribution of those whose roots lie outside of the country.

This 200-page anthology features more than 50 poets whose places of origin range from Angola to Japan, Saudi Arabia to Poland, Italy to India, Canada to Romania, Greece to Brazil, with the UK, the US and many other places being also represented. Individually these writers bring new energy and perspectives to a subject that has long been a constant in writing from Ireland; collectively they provide readers with a fresh new portrait of a changing Ireland and, by extension, a changing world.

In Writing Home: The ‘New Irish’ Poets, Pat Boran introduces 50 poets from all over the world who between them explore the many meanings and connotations of the word ‘home’. Hailing from places as diverse as India and Italy, Poland and Pakistan, Canada and the Democratic Republic of the Congo – as well as the US, the UK and Ireland itself – together they present an updated picture of a changing country while, at the same time, expanding the very definition of ‘writing from Ireland’.

The poems gathered in Writing Home: The ‘New Irish’ Poets are as various and lively as we might hope for. Some contributors might be said to ‘write home’ in the traditional sense, describing and explaining what they find in the place they now live. For others ‘writing home’ is a determined, creative act of self-definition.

For all of them there is the real sense that writing is itself a kind of home-building, not least at a time when so many borders, physical and psychological, are under threat of closure across the world.

Special thanks to Anna Hryniewicz (Anna Hryniewicz.com) for permission to feature her painting ‘Parallel world 29052017’ as the cover image of Writing Home: The ‘New Irish’ Poets. Chiamaka Enyi-Amadi is a poet, communications officer and content creator. She was born in Lagos, Nigeria and grew up in Dublin, Ireland. A recent honors graduate of University College Dublin, her work specializes in creative writing, copy writing and editing/proofreading. She has edited and contributed to Otwo magazine for The University Observer (University College Dublin). Her work has been published in various magazines both online and in print. Chiamaka Enyi-Amadi has performed in festivals, cultural events and workshops around Ireland, and has worked with various arts organisations and publishing agencies. 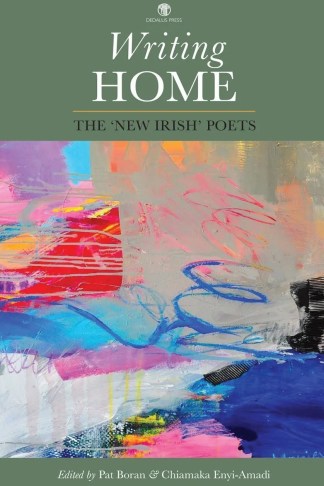