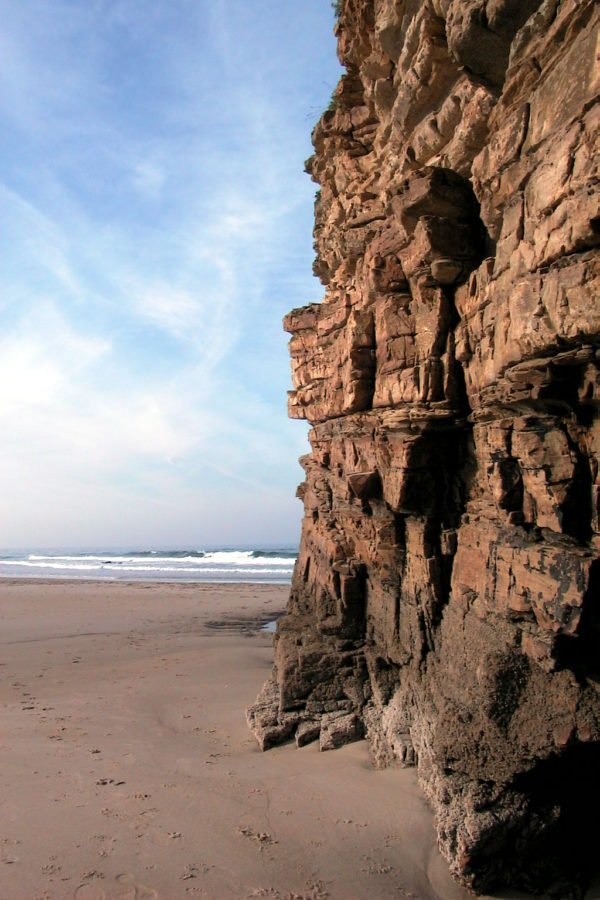 Keith Payne’s letter from Galicia, first published in The Level Crossing, introduces two of the new wave of Galician poets.

World is crazier and more of it than we think,
Incorrigibly plural …

IT WAS AS IF MacNeice had predicted what was happening in front of me on the screen last night. I was sat at my desk in Vigo correcting some Galician translations, a half dozen tabs open on the desktop as I clicked back and forth between dictionaries, verb tables and the newsfeed coming from the exit polls for Spain’s general election: the two-party system was over, things had changed suddenly.

‘Spain is Different!’ Manuel Fraga announced in the late sixties as he began to package Scandinavian and British tourists off to the Costa del Sol. Like his boss, Fraga was Galician and was Franco’s Minister for Tourism. Just forty years on and the PP, the conservative party that Fraga founded, was finally realising that things were indeed, very different, but not how they had imagined. Ada Colau, an anti-eviction activist, has become Barcelona’s first woman mayor. Manuela Carmena, a retired judge, defender of workers’ rights and of detainees during the dictatorship, is the first independent mayor of Madrid. I hummed a few bars of Old England is Dying, and listened for the Medusa howls of Spain’s elite as Podemos, Equo, Barcelona en Comú and En Marea (The Turning Tide)washed over Old Castile, and Fraga’s party were left ‘not waving, but drowning.’

Waves of emigrants have been leaving Galicia since boats were first floated. According to the Leabhar Gabhála, it was Galicians, Breogan’s sons and grandsons, who were the last to populate Ireland. You know them as the Milesians. In my partner’s family there is exactly five years each between her mother, her uncle and her aunt. A common pattern in Galicia where it took five years to make enough money for a return ticket from the Americas before going back, a son or daughter conceived just before you sailed away. Su’s family all recognized Frank O’Connor’s ‘My Oedipus Complex’ when I told them the story one Friday night at the house. Almost every house in the region has a ship’s trunk somewhere where you will still get a whiff of Brazilian coffee when you open the lid and stick your head in. For the most part it was the men who emigrated, waves of them, and the women were left behind to raise the family, mind the house and manage the land, if land there was; it’s written all over their hands. Since the Nineteenth-Century Galician Revival, the figure of the stoic, weeping Galician woman stood on the cliffs has been forged in iron in the collective memory.

But the wave is turning. A wave of young Galician poets, women mostly, have reimagined themselves as something other than that tragic figure on the cliffs weeping and wringing her hands helplessly as the ships sail away. She may still be found on the cliffs from where María Do Cebreiro writes back that ‘The wind puts across the body’s cut / in so soft a manner it is no longer  / an invasion or even a sign of / ownership.’ She celebrates that ‘the joy of skin / is in its loosening.’ Blown free as it were, Do Cebreiro is joined from the cliffs and the streets, the cafes and bars, from bed and balcony, from ‘Picking apples in Tolstoy’s Garden,’ from New York’s ‘Sing-Sing Prison,’ from ‘Midtown Manhattan’, ‘The Charles Bridge’, a ‘Taxi in Lima’ and the ‘The Cotton fields of Thessaly’ by her contemporaries Yolanda Castaño, Chus Pato, Lupe Gómez, and Elvira Ribeiro among many others. Some of whom send me back and forth and back and forth again and again through the pages of Servando Pérez Barreiro’s Diccionario Completo Galego-Inglés as my finger digital clicks back to the exit polls that ticker-tape down the screen. A change is washing over Spain and as these poets write the wave, I allow myself a little drunkenness on their variorum edition.

And the fire flames with a bubbling sound for world
Is more spiteful and gay as we supposed.

MacNeice visited Spain in 1936 with Auden, and when asked which side he supported in the Civil War responded: ‘I support the Valencia Government in Spain. Normally I would only support a cause because I hoped to get something out of it. Here my reason is stronger […]’ To the same question, Beckett responded ‘¡UP THE REPUBLIC!’

I DON’T KNOW IF MacNeice made it up to Galicia where Laurie Lee first landed in Spain and from where he began his walk that would eventually walk him right into the Spanish Civil War. His first port after leaving England was Vigo: ‘I landed in a town submerged in wet, green sunlight and smelling of the waste of the sea […] The drowned men rose from the pavements and stretched their arms, lit cigarettes and shook the night from their clothes […] and strange, vivid girls went down the streets, with hair like coils of dripping tar and large mouths, red and savage.’ I can’t speak for their hair, but these poets from Galicia are as savage and vivid in their poems as Lee’s somewhat seasick imagination. Poets who are toppling the Royal Galician Academy’s bookshelves and emptying its Royal Members’ pockets, with Yolanda Castaño’s taunting that ‘You need to frig the alphabet / till it spurts unlikely links.’ I click back again to the exit polls as they come to a close and as the joy and horror from the talking heads staggers down the screen I think of Paddy Galvin and the story of his mother daubing UP THE REPUBLIC! in red on their gable wall and his father then washing it off as the Irish Christian Front marched down the Coal Quay in support of Franco’s Spain.

I’m just in from the bakery where the paper on the counter tells me they’ve just announced Patxi Lopez of the PSOE as the new speaker in the Spanish Congress. Rajoy’s PP stayed in their seats while the young conservative Ciudadanos voted with the old socialists PSOE to exclude Podemos in what looks to be a prelude waltz to a new government of the old ways.

Tonight, around nine hundred wolves will pack hunt through the Galician mountains. Galicia is one of the last regions in Spain still home to wolf packs. Su’s village ‘Traspielas’ contains ‘tras’ the preposition ‘across’ or ‘through,’ and the word ‘piel’ skin, and it was suggested to me that Traspielas was once a trading post for wolf pelts. Recently I was brought up the mountain to a  ‘foxo dos lobos’, a wolf trap of drystone walls that opens hundreds of yards apart and graduates pincer-like down into a 12-foot pit into which the wolves were hunted. When the packs grew in number they had to abandon the mountain and come down to the villages to feed and so their numbers would be culled till a balance was struck between pack and village and they would stay once again in the mountains. Down here among the translations, María Do Cebreiro’s ‘The Blood’ reveals that ‘humans are not animals of reason / nor animals that speak. We are animals of rupture, / of the temporal breach.’ Later, in The She-Wolf, she writes  ‘The she-wolf gives milk / to the brothers who kill each other. // ‘She will not claw the cobblestones. / Far from the churchyard, far from meaning / She feeds the brothers. Yes, above all else / she feeds them to death.’

Suddenly collateral and incompatible:
World is suddener than we fancy it.

Yolanda Castaño and María do Cebreiro are two of the poets appearing in Six Galician Poets, translations by Keith Payne (Arc Publications, UK, 2016). This article, and accompanying poems, were first published in issue 1 of The Level Crossing (Dedalus Press, 2016).

And the quicksilver gone from the mirror.

From the hand feeling for the trace
I make the best of jaded pages;
the black ink shows through the flip side
and I think
this could also be writing;
scribbling new words while other
earlier words
seep through the page.

The woman wakes in the middle of the night the moment someone says:
– Pierce yourself with a needle and tell me the colour of your blood.
– My blood is neither blue nor red – she responds.
Then it slowly dawns on her there is no way humanly possible
to watch without being watched. The following day
she dreams of eating stones that are easy enough to stomach.
That she moves by night, naked calm, like the women
in Delvaux’s painting. That someone leaves a red cloth
under their pillow and can see the face of their future lover,
and the pair condense the time of their life into a dream second,
holding over almost all the caresses and conversations.
Blood is dark and dense, it has
the integrity of a solid substance, an integrity that
– almost exclusively for their colour – certain tints
and sediments of wine take on. Unlike mothers,
she gives separate space to blood and semen. She knows
there’s no end to the power of that severing,
the absolution of keeping distance. That’s why
she is wary of the sacred powers of suckling, yet knows
the place of milk in the power of wheat. The desert
is endless and its children are not yours. And so
she is not afraid, and at night in dreams, a faceless figure
appears, not threatening (a friendly presence) and so
she never forgets humans are not animals of reason
nor animals that speak. We are animals of rupture,
of the temporal breach. Able to love anything
we want with the intensity of every given moment.
She places a magnet and a clover flower
over the trine of light the stars compose for them.
She will meet his image in the quirks,
in the drop of blood the faceless voice
bid her draw in her dream. By day, the faceless
voice returns to its body, she knows and is
happy there will be no more possession,
she doesn’t want him to remember or yearn for her,
just let him live in the heat of her skin, just as
she dreams her birth in her body’s every moment. 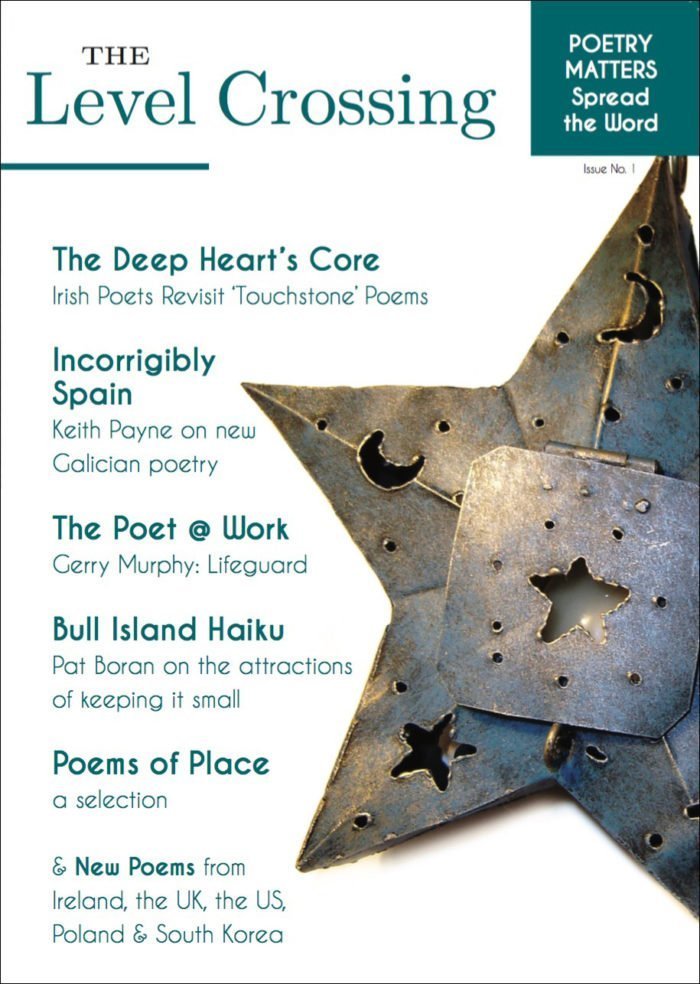 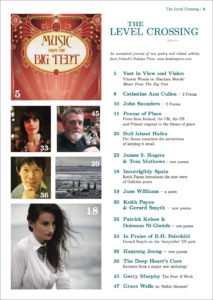 We’re finally there with issue 1 of  THE LEVEL CROSSING (see HERE).

In putting together THE LEVEL CROSSING, we set ourselves the target of producing a magazine that, in content, feel and attitude, was positive, outward-looking and, not to overstate the case, didn’t look like it was produced in the 19th century. For a first issue, we’re happy and excited with the result but can see lots of ways we could further improve. With a bit of luck, we’ll get that chance: after all, the barriers come down, but then the barriers also go up again!