Leeanne Quinn’s second collection, is a rich and generous exploration of how poetry is made and how it makes meaning. Simultaneously intimate and outward-looking, Some Lives celebrates the collaborative and open-ended nature of art. In this collection, Quinn takes on some of the giants of 20th century Russian poetry: Anna Akhmatova, Osip and Nadezhda Mandelstam, Marina Tsvetaeva. These writers, whose work has become shorthand for the power and agency of art, prompt Quinn to ask: what about here? And now? In a time of personal crisis or stasis, can poetry still be effective? And what are the implications and limits of connecting these very different lives and circumstances?

Some Lives is characterised by a paradoxical sense of simultaneous stasis and movement. It’s Quinn’s impressive use of repetition that enables her to balance these oppositional states so expertly. The subtle but significant adjustments which occur throughout the collection are brought about by Quinn’s use of repetition as a source of both sameness and difference. The collection is structured around metamorphosing repetitions, with rhyme, alliteration, and recurring phrases enacting subtle transformations.

Several poems circle back on themselves, repeating words and phrases.

The opening poem, “September”, begins in sibilance: “Wasps, then rain. Below, streets clear / to a silent siren. Some citizens scatter, / others stand looking upwards.” This poem’s sibilance, and its heavily accented style, slow the reader’s pace so that the movement of leaves “beginning to fall” at the end of the poem seems particularly significant, despite the slightness of their movement.

Several poems circle back on themselves, repeating words and phrases. “Precedence” does this particularly well. Quinn creates a stasis in constant movement through her insistent repetitions:

However, “Precedence” ends with the observation that even “where nothing // appears to move it is moving”. Even in a poem where stasis and motion are one and the same, Quinn indicates that change is constant.

Moving towards the later poems in the collection, Quinn creates a sense of physical and emotional stagnation that cannot be alleviated. In “Any Weather”, the movement “from one room / to another” that opens the poem begins a process of compression – what Quinn calls a “reducing / down of myself to negatives”. Poems become letters, which become postcards, and Quinn writes: “I used to have quite a cheerful nature, // would go out in any weather, now / I don’t think to go out at all beyond / necessity, which is now my only state”. Quinn suggests that the transformative repetitions which energised earlier poems are no longer enough to propel some of these later poems into hope. 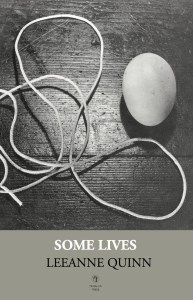 However, only a couple of pages later, the title poem reinvigorates the processes of repetition and transformation which drive Some Lives. This 19-page poem has three modes which recur in sections, all of which are interested in intertext and influence. It’s set into motion when Quinn writes: “I read a poem. // I read a poem about the end of the world”. This poem is “Weltende”, an early expressionist poem by Jakob van Hoddis. One mode of “Some Lives” consists of translations and re-translations of sections of van Hoddis’s poem. Another mode places fragments of previous poems in the collection alongside one another in new orders, to create new meanings, and another mode consists of documentary-style explorations of moments and observations pertaining to the life of the speaker and the lives of the writers who influence Some Lives.

Each section emphasises the time-disrupting power of poetry to enable dialogues simultaneously across years and decades, and across a single moment. Quinn links the drafty provisionality and elusivity inherent to translation to the creation of her own poetry. Here, a poem written a hundred years earlier transcends time, language, and circumstance to accumulate new relevance and resonance, in its uncannily familiar evocation of an apocalyptic world in which “(t)he tides are rising”. In a poem so interested in writing which could be classified as modernist, Quinn rethinks the modernist call for the new. Instead, “Some Lives”, and the collection as a whole, argue for the importance of precedence, and the open-ended, intertextual, collaborative nature of creation. Here, stasis and movement, tradition and change, exist alongside one another rather than in opposition. This collection is a nuanced, thoughtful meditation on poetry’s possibilities.